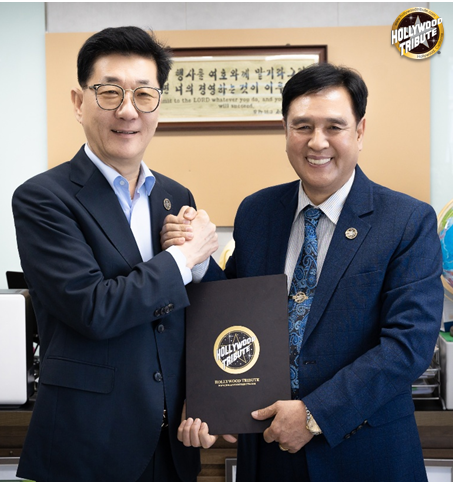 HOLLYWOOD, Calif. - PRDelivery -- On February 18th, 2022, Mr. Wan-kyo Lee, president of Korea Executive office of Peach Finance Services Group in Seoul, officially joined the Hollywood branding business Hollywood Tribute®. The Chairman of Hollywood Tribute® Mr. Don Cho has officially appointed Mr. Wan-kyo Lee and his organization as a Hollywood Tribute® representative for Korea. Hollywood Tribute® is a trademarked organization registered by the US Trademark Office and is officially recognized by the Hollywood Chamber of Commerce for specializing in cultural exchange and the globalization of Hollywood entertainment. Hollywood Tribute® aims to leverage Hollywood's resources and influence to establish a new base of operation in Korea through "Hollywood Tribute® Korea" as well as a globally recognized landmark. Originally, Mr. Lee was introduced through his headquarters office in New York as their business is engaged in investment management. His Peach Financial Services Group is a subsidiary of Peach Investment & Reits, Inc. located in Wall Street, New York, USA. where his leadership and expertise has been recognized across the countries of U.S.A., Vietnam, Russia, China, Indonesia, and Saudi Arabia. He has served as a key personnel for The Korean Sport & Olympic Committee and has also been known for the "Pro-Specs" branding, a renowned South Korean athletic footwear and sportswear. His other dedications include Christian ministry work in Vietnam and his humanitarian organization building homes and communities, providing education, creating employment opportunities for people with disabilities, and the economic development for the "Lai Đại Han" community, which consists of mixed race people born from members of the Korean Armed Forces and Vietnamese locals.

More on PR Delivery
Mr. Lee is also the recipient of multiple national awards for representing South Korea for excellence in his field and humanitarian efforts by the Committee for Exceptional People of the Republic of Korea in 2018 and from the Committee of Korean Journalists.

More on PR Delivery
New Hollywood Tribute projects will be announced jointly with the partnership during the annual "Hollywood Tribute: Oscar" event for celebrating the 94th Oscar Academy Awards in Hollywood, California.