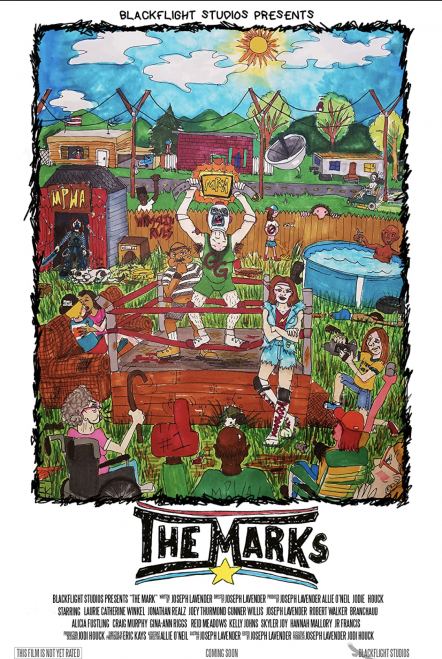 ATLANTA - PRDelivery -- The Marks, starring none other than former World Championship Wrestling athlete Joey Thurmond will make its world premiere in the new Hollywood of the south Atlanta GA!  Filmed and produced in Georgia, a state synonymous with the world of pro-wrestling and the setting for The Marks during a heyday of the wrestling show during the 1990's.  Written by Joseph Lavender and Johnathan Realz, The Marks takes a comedic dive into an intimate and often real side of professional wrestling that few if any get to experience.  As the story follows Maggie "Lightning" Dixon (Laurie Winkle, Father of the Bride 2022) the daughter of legendary wrestling Champion Jack "The Real Deal" Dixon (Joey Thurmond) as she navigates life and manages her own wrestling promotion while trying to forget and avoid her estranged father along with the help of her best friend Jonathan 4Realz (Jonathan Realz, The Walking Dead) who idolizes Jack.

"In his first comedic lead role Joey Thurmond shines brightly on the screen supplying hilarious timing, expression, and emotion, all the while reaching for the heart of the viewer", wrote one professional reviewer.   Joey was recently dubbed one of the "Hottest Independent Actors" of recent times and has made his presence known to the movie and television industries.  This will be Thurmond's third major motion picture release of 2022.  Joey played Detective Clemmons in Scott Free the urban crime thriller that has garnered attention as a true and life changing glimpse of urban life.  The Skeleton's Compass released in September, a family friendly adventure features Thurmond as Tim Brown the father trying to make a better way for his family.  The Skeleton's Compass recently won the prestigious Dove Seal of Approval for families.  Joey gained world-wide attention as he and the rest of the cast of the Spike Lee produced Son of the South won "Best Cast Ensemble" and a "Film of the Year" award at the Cannes Film Festival in 2021.  "Being a former professional wrestler definitely helped me prepare for playing Jack Dixon", said Thurmond.  "I have seen so many similarities in both situations and characters that this film has brought to life.  While audiences will be watching and laughing at some of the situations the characters find themselves in and the way they handle them, there is a lot of reality in this story", Joey said.  Thurmond's wrestling career was cut short in 1992 when while filming for World Championship Wrestling he suffered a broken back which left him paralyzed from the waist down. The injury would go on to be referred to as one of the top 25 "Most Gruesome Injuries" in pro-wrestling.  After miraculously regaining the use of his extremities Joey has appeared in over 50 productions.

More on PR Delivery
The Marks, while being hilariously funny also takes the viewer into a heartfelt and often seriously dramatic poise.  As we see the human side of a troubled father and daughter relationship where both parties struggle to recover from the past and hope to build on a lasting connection.  Those poises are mostly short lived as a comedic slap in the face of reality brings the viewer back to realize this is a comedy!

The Marks was produced by Black Flight Studios and Directed by co-writer Joseph Lavender who has appeared in many top films respectively including an appearance in the Alvin and the Chipmunks series of films.  This is Lavender's second feature to direct.  "As a huge fan of the world of professional wrestling this movie was more of a labor of love than anything else", said Lavender.

With an amazing cast of extremely colorful characters including very famous professional wrestlers the likes of "The Golden Boy" Chic Donavan, the late Daffney Unger aka The Scream Queen, and Brian Alexander, The Marks is not only destined to become a cult classic for wrestling fans but also one that those who wouldn't consider themselves to be "Rasslin" fans will absolutely enjoy.

The World Premiere of The Marks will be Tuesday November 15th at 7:30 at the Historic Plaza Theater 1049 Ponce De Leon Ave NE Atlanta GA 30306.  Full red-carpet formalities will be in effect.  Top billed cast and crew are all expected to be in attendance. There are limited seats being offered to the general public.