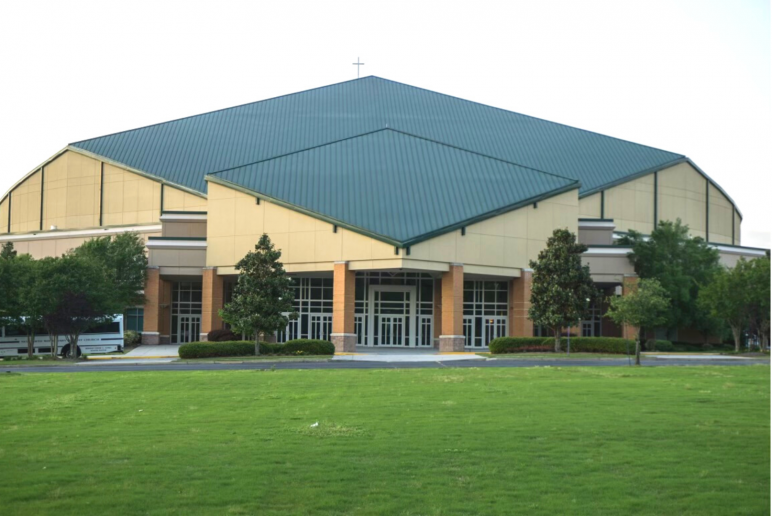 With costs and inflation on the rise, back-to-school shopping is looming in the minds of many families. Black-woman led shoe company TRONUS has supported many community causes while gaining the attention of celebrity supporters and building relationships with big names in the footwear industry. They've intentionally expanded their national outreach this year, and joining New Birth Missionary Baptist Church marks making sure that same give-back muscle is also flexed right within their own city.
ATLANTA - PRDelivery -- Recently, it seems like TRONUS is either planning or announcing a new partnership every few weeks. The unisex sneakers with a luxury athleticwear feel made quite an impression when they stepped onto the footwear scene . . .  and the company has shown no sign of slowing down. Professionally they've partnered with Footlocker Inc.'s subsidiaries Eastbay.com & Champs Sports, and most recently announced they'd be in several locations of The Athlete's Foot stores. The leadership team at TRONUS has supported multiple community initiatives since its origin, and bringing on a new community partnerships head at the top of this year has only turned up the volume on giving back and furthering deserving causes. Joining the megachurch-family at New Birth Missionary Baptist Church in assisting the youth of the Atlanta area seemed like another perfect fit. And a perfect fit is exactly what's taken for granted in many cases. A 2020 study found that 67% of all kids are wearing shoes that are too small. And with the cost of raw materials and shipping spiking, shoes are becoming far more expensive to provide while inflation is impacting many families severely. New Birth is collecting shoes from June through August 7th and TRONUS is glad to be one of the supporters of this needed initiative. "The pandemic is not just a health crisis but also a financial one that has impacted the lives of families as they work to meet their most basic needs during these trying times. Our partnership with TRONUS will help alleviate the strain back to school shopping can place on parents by providing 5,000 students with shoes and school supplies so they can remain focused on their academics this school year. We are beyond thankful to our generous partners and look forward to impacting the soles and souls of young people across the metro area," states Dr. Jamal Bryant - Pastor of NBMBC.

More on PR Delivery
With that in mind, TRONUS will be kicking off New Birth's community shoe giveaway this year with an event held at the church on Sunday, June 19th, 2022. The Buy One, Give One style event will donate one pair of shoes to the shoe drive for every pair sold that day. The confluence of significance this date holds is not lost on anyone. The church is looking forward to celebrating fathers in the community, especially Pastor Jamal Bryant who is a proud father and spiritual father to many through his ministry. This year, the 19th will be both Father's Day and Juneteenth - only the fifth occurrence of that coincidence since 1990. Juneteenth, the newly named federal holiday in the US that commemorates the emancipation of enslaved Black Americans, holds extra special meaning for TRONUS. On that day two years ago the company announced it'd be launching soon - a Black founded newcomer intent on shaking up the scene. That's exactly what they've done.

"It still blows my mind that I was the first woman athlete to own my own shoe company", shares Santia Deck, the young CEO and charismatic face of the shoe brand. Not just an imprint or a capsule collaboration; Deck and her mother, Cynthia Cureton-Robles, co-founded TRONUS and make decisions about everything from design, manufacturing, distribution, marketing and partnerships. The duo brought on new talent, pulling again from the large family pool of talent, welcoming Lauryn Deck as Head of Partnership Development. Named one of this year's Women Of Influence by the Milwaukee Business Journal, she provides direction to every partnership TRONUS leans into. Since she has joined the Atlanta-based team, remotely from her North Central US base, Lauryn has been hard at work in the partnerships department. She recently shared, "Our goal is to help progress communities by way of people and organizations on the front lines through efforts led by those closest to the obstacles and solutions."

More on PR Delivery
The mother and daughter co-founding duo behind TRONUS, who both reside in the greater Atlanta area, have been intentional about making sure that some of those partnerships remain local - even while collaborations span from Miami to New York. The community shoe initiative coordinated by New Birth Church was an exciting opportunity to do just that with an organization already so plugged into the heart of Atlanta. Family centric, the TRONUS team led by Santia & Cynthia fully understand the importance of children having what they need to start the school year on the right foot. "We've always been dedicated to giving back as a family and having grown this company into a position where we can support the community on an even larger scale is extremely important to us," explains Cureton-Robles; TRONUS COO.

The entire community is invited to celebrate with New Birth Missionary Baptist Church and support the shoe drive with the TRONUS team. It's all starting at 9:30am at 6400 Woodrow Rd, Stonecrest, GA 30038 on a very special Sunday, June 19th, 2022.

TRONUS invites you to slide into luxury with the lightest, most comfortable unisex sneaker in the world. History making female football player made history a 2nd time as the 1st female athlete to own a sneaker company. Owner, Santia Deck spent several years developing a sleek futuristic footwear brand whose unique style is matched only by its impeccable comfort. The bold look draws you in, and the feel will get you hooked.

This disruptive startup began taking pre-orders when they launched in July of 2020. Now, customers of all ages - from student athletes to celebrity supporters - are becoming loyal TRONUS fans. Many celebrities are fans such as NFL greats, Deion Sanders, Antonio Brown and Michael Strahan; Rappers like Waka Flocka and Z-Ro; Gospel Singer, James Fortune; Comedian, Karlous Miller and Soccer Superstar, Josef Martinez and Celebrity Jeweler, Johnny Dang to name a few.