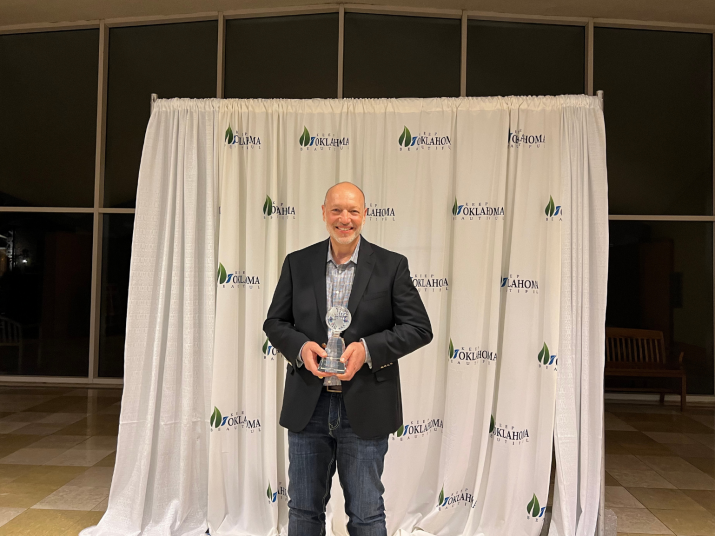 Robert Pickens, Vice President of Recycling at American Waste Control, is the recipient of Keep Oklahoma Beautiful's Lifetime Achievement Award.
TULSA, Okla. - PRDelivery -- Pickens has served as the Vice President of Recycling at American Waste Control since 2013. In this time, he has helped implement several solutions to help increase recycling efforts in the city of Tulsa and surrounding areas. One of these initiatives was the installation of Tulsa's only materials recovery facility (MRF). The MRF sorts and processes through millions of pounds of recyclables, which are then sold to Oklahoma manufacturers.

Over the past decade, Robert has hosted hundreds of students, educators, and community leaders on tours at American Waste Control's recycling facility, Mr. Murph. He has educated local recyclers on the importance of recycling by communicating what items are recyclable and how these recycled items are reused in Oklahoma—a process that boosts the local economy and keeps jobs in the state.

More on PR Delivery
Pickens oversees the facility that deals with separating out reusable material from hundreds and thousands of discarded items that would otherwise go to a landfill. He handles all of the facility's operations, from how items are sorted to how they're sold off to local markets. As such, Pickens also serves as an industry leader, constantly working to improve recycling efforts.

Paul Ross, Vice President of American Waste Control, said of Pickens, "Robert is passionate about the work he does. He has made a significant impact on the recycling industry in Oklahoma, and we are so lucky to have a leader and professional like him working with us at American Waste Control."

About the Lifetime Achievement Award

Keep Oklahoma Beautiful's Lifetime Achievement Award is awarded to a person who has made significant contributions to the sustainability and environmental landscape of Oklahoma. This work should span at least 25 years and show a passion for Oklahoma's land. Keep Oklahoma Beautiful awards the Lifetime Achievement Award at their annual Environmental Excellence Celebration.

American Waste Control is the product of more than 50 years in the waste collection business, founded by visionary Kenneth Burkett. Kenny was inspired by family and challenged by his own work ethic and grit to never give up, no matter how hard the work became, no matter how many challenges the day brought him. And because he was hauling trash all day and working on his truck all night to keep it running – there was no shortage of challenges Kenny faced. Because of the price Kenny was willing to pay over the years, American Waste Control has grown from a one-truck, one-person operation to a 185-truck fleet with more than 250 employees. Today AWC services the Tulsa community providing the best waste management and Tulsa dumpster rental solutions in Northeast Oklahoma.