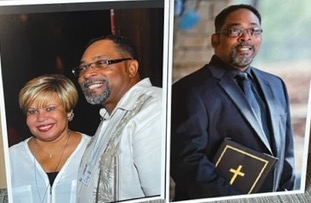 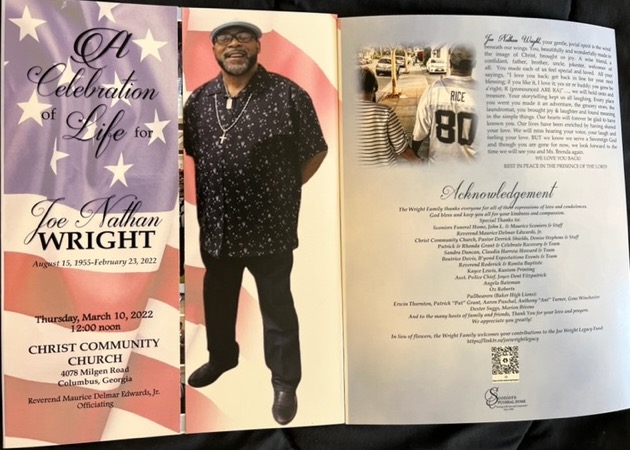 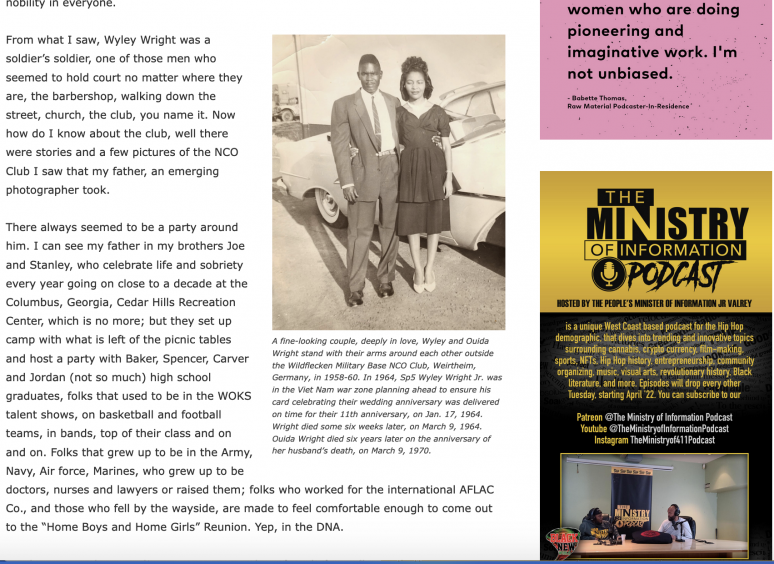 The family of Joe Nathan Wright (August 15, 1955-February 23, 2022), laid their much adored by family and friends loved one to rest with the assistance of Sconiers Funeral Home at Fort Mitchell National Cemetery in Fort Mitchell, Alabama on Thursday, March 10, 2022.  The ceremonies officiated by Reverend Maurice Edwards at Christ Community Church in Columbus, Georgia with Lead Pastor Derrick Shields.

Wright  served in the 197th Division of the U.S. Army. He was the son of a fallen Vietnam War hero, Sp5 Wyley Wright Jr., who served in the 114th Aviation Company of the U.S. Army, received full military honors.  After serving over 300 missions, his father's last mission, March 9, 1964 in Vietnam, was serving as honor guard for then Secretary of Defense Robert S. McNamara.

At the 12 Noon service, Assistant Chief of Police Joyce Dent Fitzpatrick, presented the proclamation on behalf of the City of Columbus.  Joe Wright, with his brother, Stanley Wright  was co-founder of the popular Home Boys and Home Girls Reunion associated with his "Street Disciples Ministry" (https://www.prlog.org/12793463-homeboy-homegirl-reunion-celebrates-tenth-anniversary-in-columbus-georgia.html). He was a 1974 graduate of Baker High School, where he met the love of his life, Brenda Michelle Tibbs, who became his wife and mother of his three children.

Dent-Fitzpatrick, who also lived in the historic Cedar Hills subdivision of Columbus, where Wright grew up and also graduated from Baker High School, led a Baker Lions affirmation that the crowd joined in with much joy and gusto, noting "Baker as the best high school ever."  Baker built near Fort Benning, Georgia was the school for many active and retired military families.

Patrick "Pat"  Grant, a member of the Celebrate Recovery Team at Christ Community Church., shared with family that "Joe Wright was the first to give his testimony of recovery at the church."  Additionally, Grant informed the family that he and Joe Wright were a part of Baker High's Track 1973 440 Relay Team including Albert Parker and Andrew Pugh that set a record in the Columbus Relays that held until 2007.  A fact the family did not realize.

Wright was an Executive Producer for "Love Separated in Life…Love Reunited in Honor," a short documentary about the reburial by the four Wright siblings of their father, Sp5 Wyley Wright Jr., a fallen Vietnam war hero at Arlington National Cemetery on March 10, 2014, after 50 years of being in a segregated cemetery In Jacksonville, Florida.   The siblings also reburied Ouida Fay McClendon Wright, their mother with their father at Arlington National Cemetery.  Mrs. Wright, who died six years after her husband on March 9, 1970, had been buried at Green Acres Cemetery in Columbus, Georgia for forty-four years at the time.

The Wright Family presented a copy of the 15-minute short documentary, "Love Separated in Life…Love Reunited in Honor" to Christ Community Church so that Wright's legacy of the testimony of his faith can continue to bless others.  "We are pleased to have the Wright Family Film in our church library, not only as a tribute to Joe, but as a tool to encourage others in their faith in our Lord and Savior Jesus Christ," said Derrick Shields, Lead Pastor of Christ Community Church.  "Joe touched so many lives and will be missed by all who had the pleasure of meeting and being inspired by him."For more about the film, visit www.lovereunited.org.  It is available for community screenings for discussions around faith, history, family, race-relations, the Vietnam War among other themes.  Those interested in screenings can email lovereunited2014@gmail.com.

Preceded in death November 18, 2018 by his wife of 38 years, Brenda M. Tibbs Wright, and known for his gregarious and helpful spirit as noted in the Columbus proclamation, Joe N. Wright is mourned by his family that includes his children: Damon Chase Wright, Candis Wright and Chad Nathan Wright and grandchildren; along with siblings, the former WTVM reporter Jackie Wright, Stanley Wright and Phyllis Wright Cameron; and  host of other relatives and friends.

More on PR Delivery
The short obituary can be seen here: https://www.prlog.org/12907683-us-army-veteran-joe-nathan-wright-brother-father-friend-mourned-in-columbus-georgia.html and includes links to a more complete version: http://www.wrightnow.biz/apps/articles/web/articleid/83923/columnid//default.asp. "Confirmation of Eternal Life", https://youtu.be/liqcWXBLwsk, is a tribute posted on 30 Minutes to Success Inspirational Tuesday Talk hosted by Jackie Wright.

For those wishing to express condolences, in lieu of flowers, the Wright Family has requested a contribution to the Joe Wright Legacy Fund: https://linktr.ee/joewrightlegacy.

I Love My Black Daddy
https://sfbayview.com/2018/12/i-love-my-black-daddy-no-matter-what-white-society-and-obama-say/

In Joe's Own Words at the Empress of China San Francisco (http://www.theempresssf.com/):

WELCOME:
We Enjoy Living Because Our Memories Endure
https://www.youtube.com/watch?v=q1V_mHVuD9I